(1881 – 1955) Hand written note to Pedro Radie. Hotel Ritz, Madrid June 12, 1948. Fleming thanks Radie for welcoming him to Madrid. He was there to be presented with a doctrate form the University of Madrid. Rare. Fleming was a Scottish biologist and pharmacologist. Fleming published many articles on bacteriology, immunology and chemotherapy. His best-known achievements are the discovery of the enzyme lysozyme in 1923 and the antibiotic substance penicillin from the fungus Penicillium notatum in 1928, for which he shared the Nobel Prize in Physiology or Medicine in 1945 with Howard Walter Florey and Ernst Boris Chain. In 1999, Time Magazine named Fleming one of the 100 Most Important People of the 20th Century for his discovery of penicillin, and stated; “It was a discovery that would change the course of history. The active ingredient in that mold, which Fleming named penicillin, turned out to be an infection-fighting agent of enormous potency. When it was finally recognized for what it wasa??the most efficacious life-saving drug in the worlda??penicillin would alter forever the treatment of bacterial infections. By the middle of the century, Fleming’s discovery had spawned a huge pharmaceutical industry, churning out synthetic penicillins that would conquer some of mankind’s most ancient scourges, including syphilis, gangrene and tuberculosis”.

Be the first to review “Alexander Fleming” Cancel reply 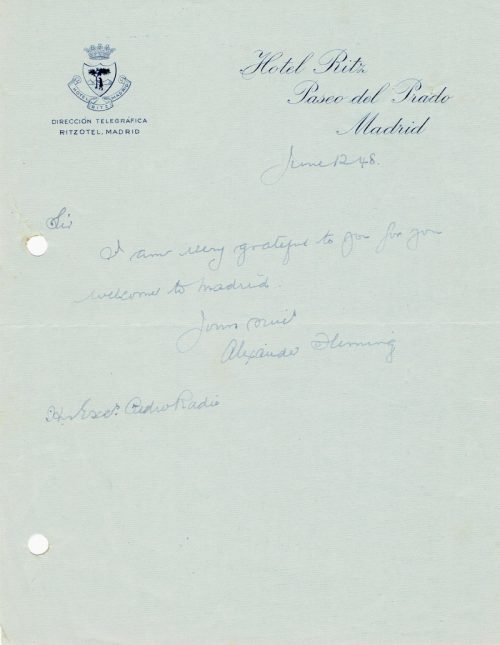