Thomas Brisbane (1773 – 1860) who was a British Army officer, administrator, and a Scottish astronomer who established an observatory at Paramatta near Sydney Australia in 1822 and a magnetic observatory at Makerstoun Scotland in 1841. Upon the recommendation of the Duke of Wellington with whom he had served under, he was appointed Governor of New South Wales from [1821-1825]. Whilst in Australia he catalogued 7,385 stars. The city of Brisbane, Australia, is named in his honour. Hand written letter 20th April (no year) written in Rye Sussex. Rare 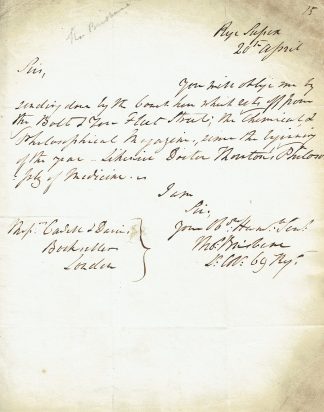